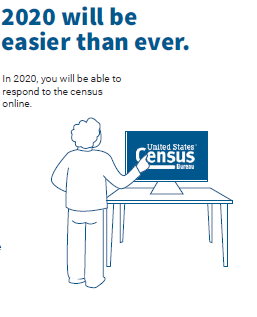 Once every 10 years, the U.S. Constitution requires a full count of the population to reapportion seats in the U.S. House of Representatives. That exercise - the U.S.
Census - begins March 2020. Washington is working hard to ensure the state's residents are fully counted.

For the first time, the primary method of response to the census will be electronic. The U.S. Census Bureau expects at least 70% of the population will complete census forms online.

Beginning March 2020, all households will receive a postcard from the U.S. Census Bureau asking them to take the census online or by phone. Each household will be asked to provide details about people who reside in the household "most of the time" as of April 1, 2020, the official "Census Day".

Why is the census important?

Census results drive decisions that will affect economic investments in our state and our representation in Congress until 2031.

Census results determine congressional representation and the number of our Electoral College votes and are used to draw boundaries for state and local election districts. ln the last census, Washington gained one seat in Congress, bringing our total to 10.

The federal government also uses census numbers to distribute more than $800 billion to states, counties and cities for education and health programs, highways, roads and bridges, water and sewage systems, and other projects vital to our health and well-being. Nonprofits and businesses use the data to help determine where to build health care facilities, child care and senior centers, grocery stores and new factories.

Based on these numbers, the state would lose up to $5.8 million for every 100 households missed, which would affect its ability to adequately support children, veterans, senior citizens and low-income families.

By federal law, the information you provide is confidential. The U.S. Census Bureau uses the highest level of data security to safeguard the information it receives. ln fact, census forms can be used ONLY to produce statistical information about the population, and penalties for violations are severe.