City facilities will be closed on Monday, May 30th in observance of Memorial Day. 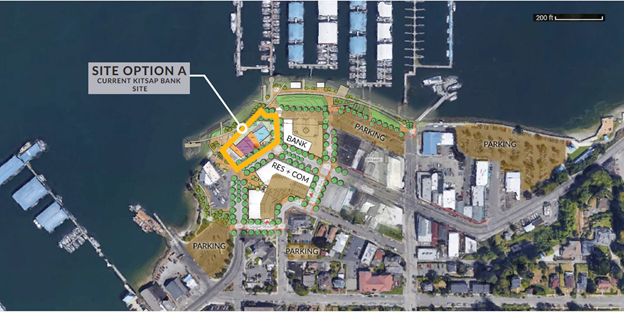 PORT ORCHARD, WA – The South Kitsap Community Events Center (SKCEC), a project in the works for over two years, has reached another milestone with the selection of a site for the planned 24,000-square-foot facility.

The process that included the community and stakeholders has selected the current Kitsap Bank location in downtown Port Orchard. Three sites in downtown were considered and the current Kitsap Bank location was selected as the preferred site.  A community survey where more than 600 residents expressed their desires for the center drove the site selection criteria.

“The response to the survey was exceptional and enlightening,” said Mayor Rob Putaansuu. “Our citizens expressed the need for a flexible facility where they could attend celebrations and civic events, take classes and congregate with friends indoors and outdoors year-round.”

Access to the water and the ability to allow events to spill out on a waterfront public plaza as well as covered outdoor space will be featured, according to Steve Rice, partner, and lead architect for the project with Rice Fergus Miller (RFM) Architecture and Interior Design Firm.  RFM presented the site selection decision during the Port Orchard city council meeting on December 8.

The project estimated at $20 million was allocated up to a $12 million in phased funding from the Kitsap Public Facilities District in 2019.  A new Kitsap Regional Library will also be included in the design.

“Kitsap Bank is looking forward to working with the City to make the SKCEC a reality and being part of the redevelopment of downtown Port Orchard where we’ve been headquartered for over 112 years” said Kitsap Bank President Tony George.

The City anticipates the planning and design phase for the SKCEC will continue into 2022. The facility is part of a long-term downtown master plan that incorporates Kitsap Bank’s new headquarters, residential, commercial, parking solutions and waterfront reclamation.