Our doors are closed to the public, however we continue to serve the citizens of Port Orchard via telephone and email, Monday through Friday 8am to 4:30pm. Emergency services are available 24 hours a day by calling 911. 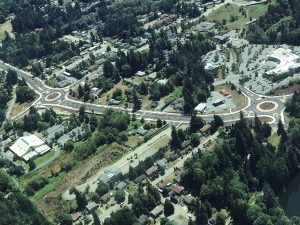 About the Public Works Department

The City maintains public sidewalks. These sidewalks are periodically inventoried and a contract is approved annually to replace the worst sections of walkways. New sidewalks are typically constructed by developers or neighborhood Local Improvement Districts.

The City maintains its parks, but it does not have a Parks activity program. Inquiries to rent the Active Club should be directed to the Public Works office at (360) 876-4991.

The City provides water and sewer service within the city limits, including the McCormick Woods community. Our city limits overlap with the West Sound Utility District, which provides services to areas within Port Orchard. Inquiries about water and sewer service should be directed to the City Public Works office at (360) 876-4991 or the districts. Kitsap County Health District can also assist you if you call (360) 728-2235.